A Very Brief History of Camping

Here in Australia, camping is a huge past time – you can go camping with your friends, family, and children. Sometimes you go camping for a weekend out, sometimes you can camp for weeks on end for your school or work holidays.

But did you know the history of this past time can be traced back thousands of years – and wasn’t always a recreational activity? 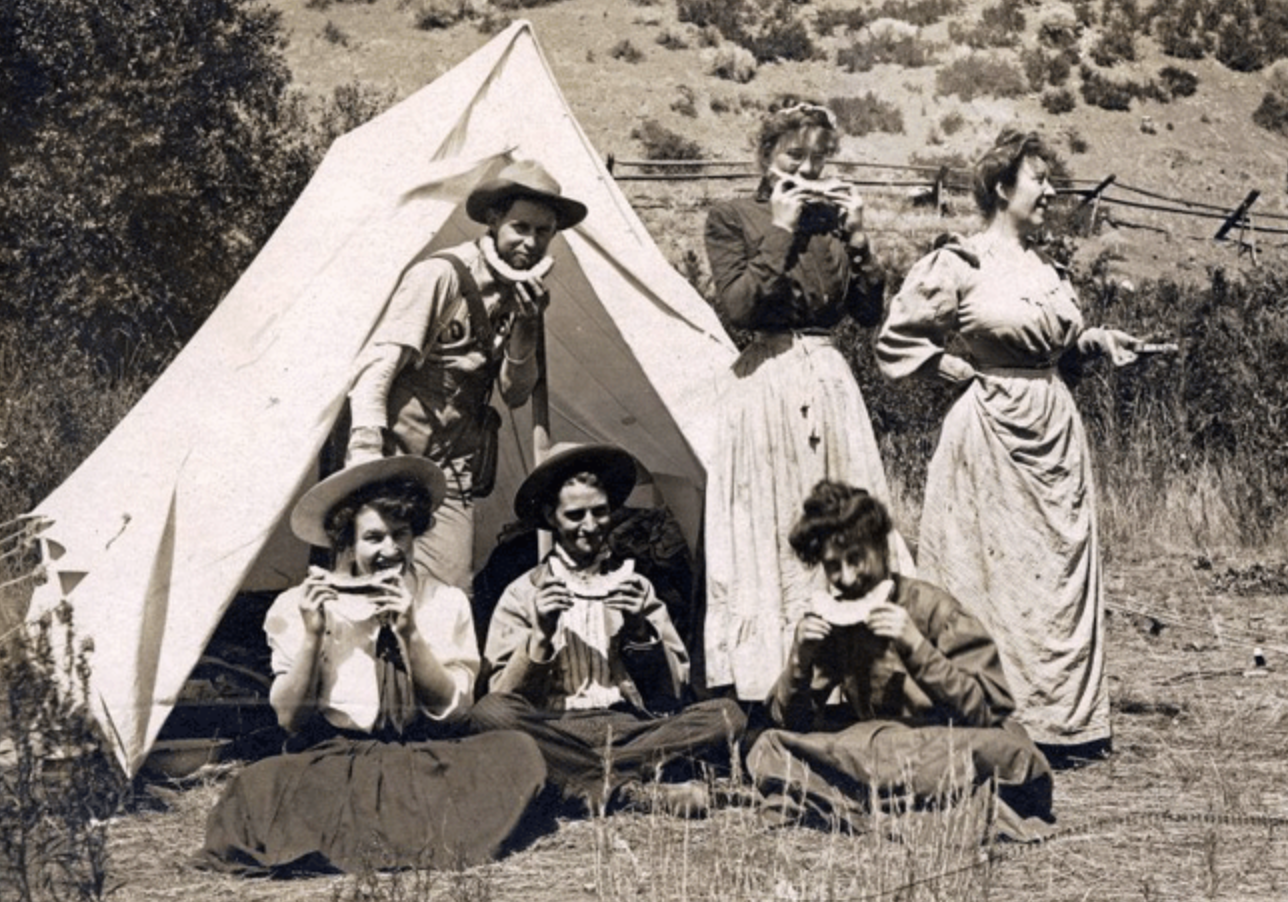 Camping in the Late 19th and Early 20th Centuries

The history of recreational camping, as we know it today, can be traced back to the turn of the 20th Century.

In 1908, Thomas Hiram Holding produced the The Camper’s Handbook, which helped to popularise his love of camping in the outdoors as a recreational activity in the United Kingdom. Holding wrote the book after remembering his early years, and the time he spent travelling across the United States of America with his family in a wagon train.

However, in the decades prior to this, recreational camping had sprung up in England as part of the late Victorian pleasure boating craze.

Victorian men and women took up skiffing, or pleasure boating, on the Thames in large numbers (so much so there is a style of boat called a Thames skiff). These pleasure outings would sometimes also include camping on the banks of the river, or on the river itself, with Thames skiff construction allowing for easy conversion from boat to floating tent.

In America, however, part of the popularity of recreational camping can be traced to William Henry Harrison Murray, who published Camp-Life in the Adirondacks, which was essentially a how-to-camp guidebook, in 1869. The year of its publication saw a huge leap in popularity of camping, particularly in New York’s Adirondack Mountains.

In the decades following, organisations such as Association of Cycle Campers (1901) and the still popular Boy Scouts (1907) cropped up, creating more of a culture and organisational structure around recreational camping.

Camps were also set up across the world in areas where temporary bases were created – gold mines, archaeological digs, and even military encampments.

From the American Civil War to Medieval European military battles to Roman and Greek epic military campaigns, camping was a way for armies to have a base with some small comforts. 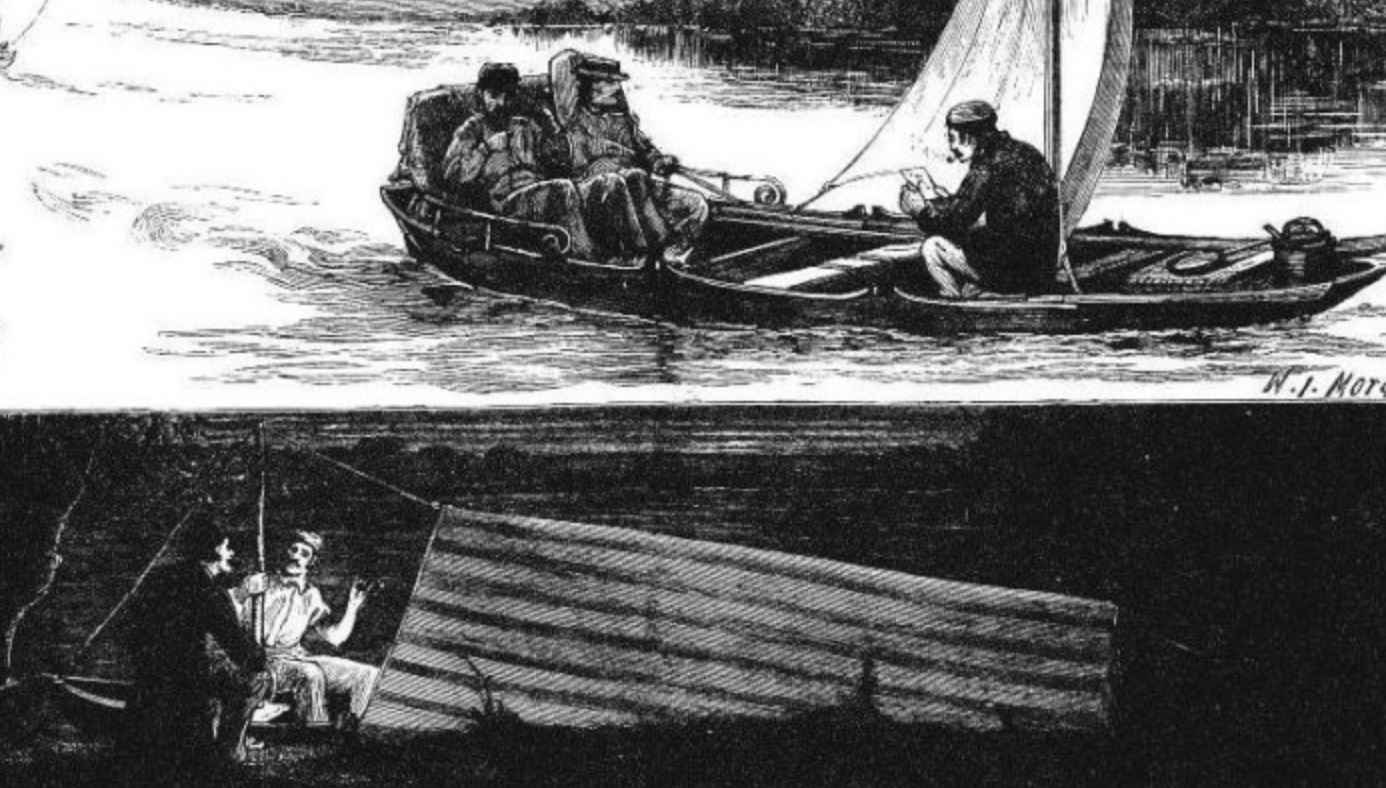 Victorian men and women took up skiffing, or pleasure boating, on the Thames in large numbers (so much so there is a style of boat called a Thames skiff).

Throughout Medieval Europe it was not actually common for travellers to set up camps. If you were a wealthy traveller getting from point A to point B, it was actually more likely you would be hopping from inn to inn along the road – and if you didn’t have enough money for an inn, you would usually be found sleeping under your cloak against a shaded tree.

The encampments you find at the Abbey Medieval Festival are more like those found on military campaigns, or temporary settlements.

Medieval tents and pavilions used in reenactment are based off of paintings and manuscripts depicting armies during campaign. As you walk around reenactment events you can see a plethora or colours, shapes, sizes, and styles depending on the period and geographic area depicted. 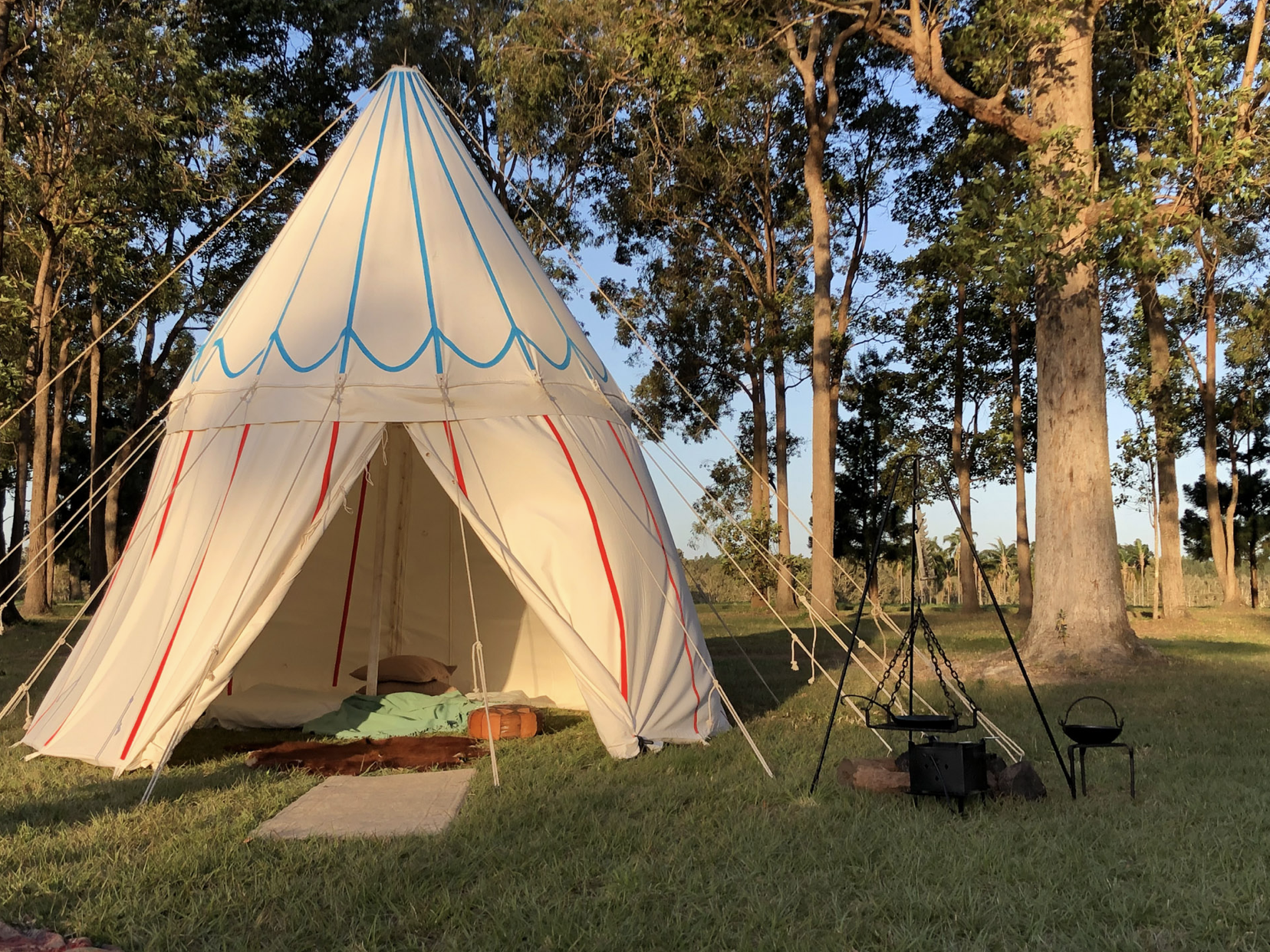 Viking encampments, for instance, tend to use an easily transportable A-frame tent, which is based off of two archaeological boat graves in Norway: Oseberg and Gokstads-ship. These tents would probably have been used to ‘camp’ on the ships they were found in.

The structure of the bell tent, like the one featured in our ‘Camping Through the Ages: 2020’ raffle actually has origins in the medieval period (or earlier!).

One of the first documented uses of bell tents is from the Byzantine Empire in 600AD, when Emperor Maurice used the tents to temporarily house his massive army. 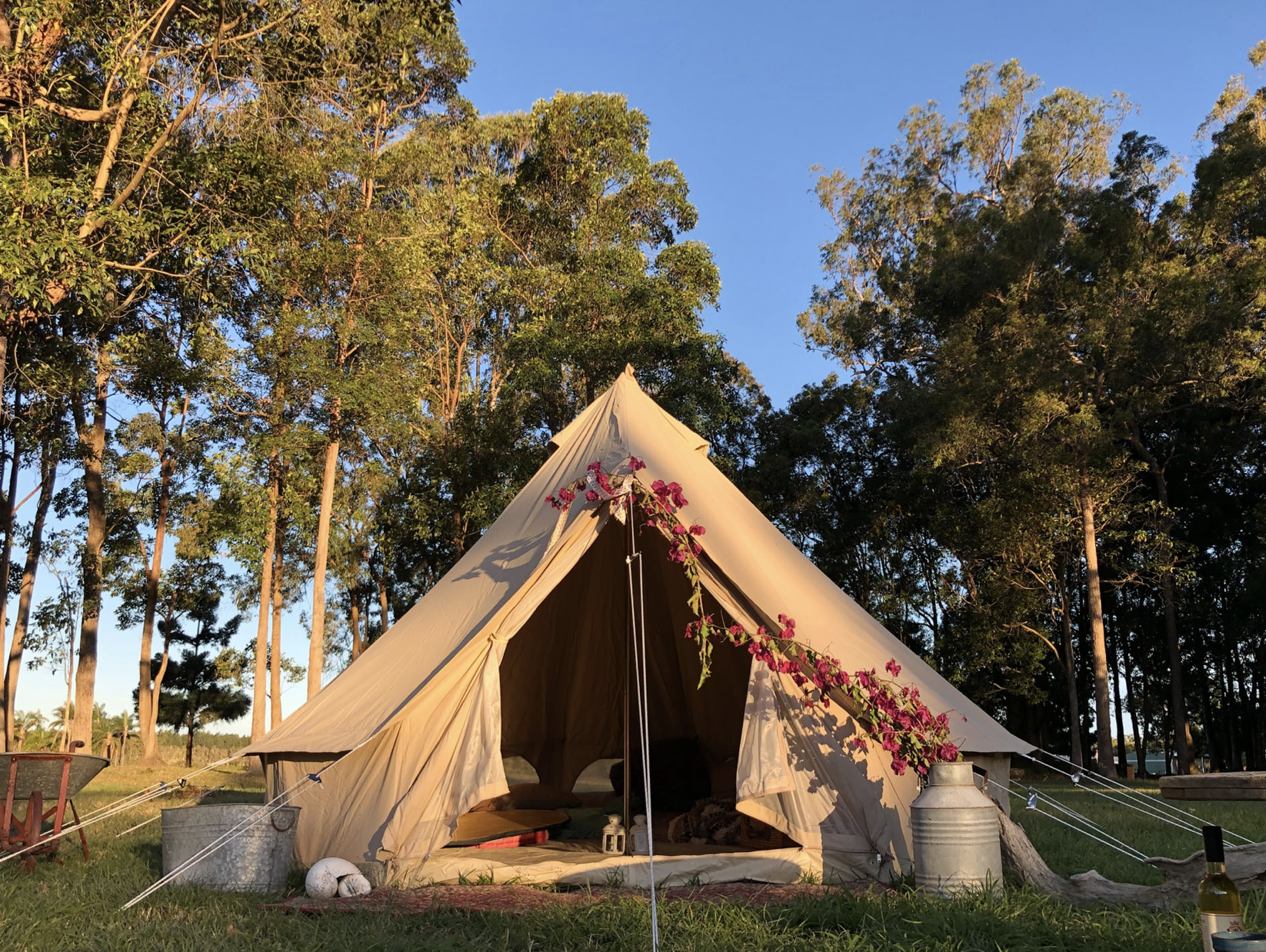 Concurrently throughout history, nomadic cultures have created countless camps to temporarily house their people as they move around for social, religious, or seasonal reasons.

From the yurts of nomadic groups in Central Asia to the tipis of the indigenous peoples across North America, the tupiqs of the Inuits to the lavvu and goahti of the Northern European Sami, portable tents have allowed people around the world to have protective structures while on the move for millennia.

All of these structures were designed to be able to provide protection from the elements, but also to relocate large numbers of people quickly and easily. Portable tents could provide shelter to people no matter where they travelled, and only had to be assembled once while also being able to be moved without fanfare (a definite advantage over fixed structures made from brick, stone, or mud!). 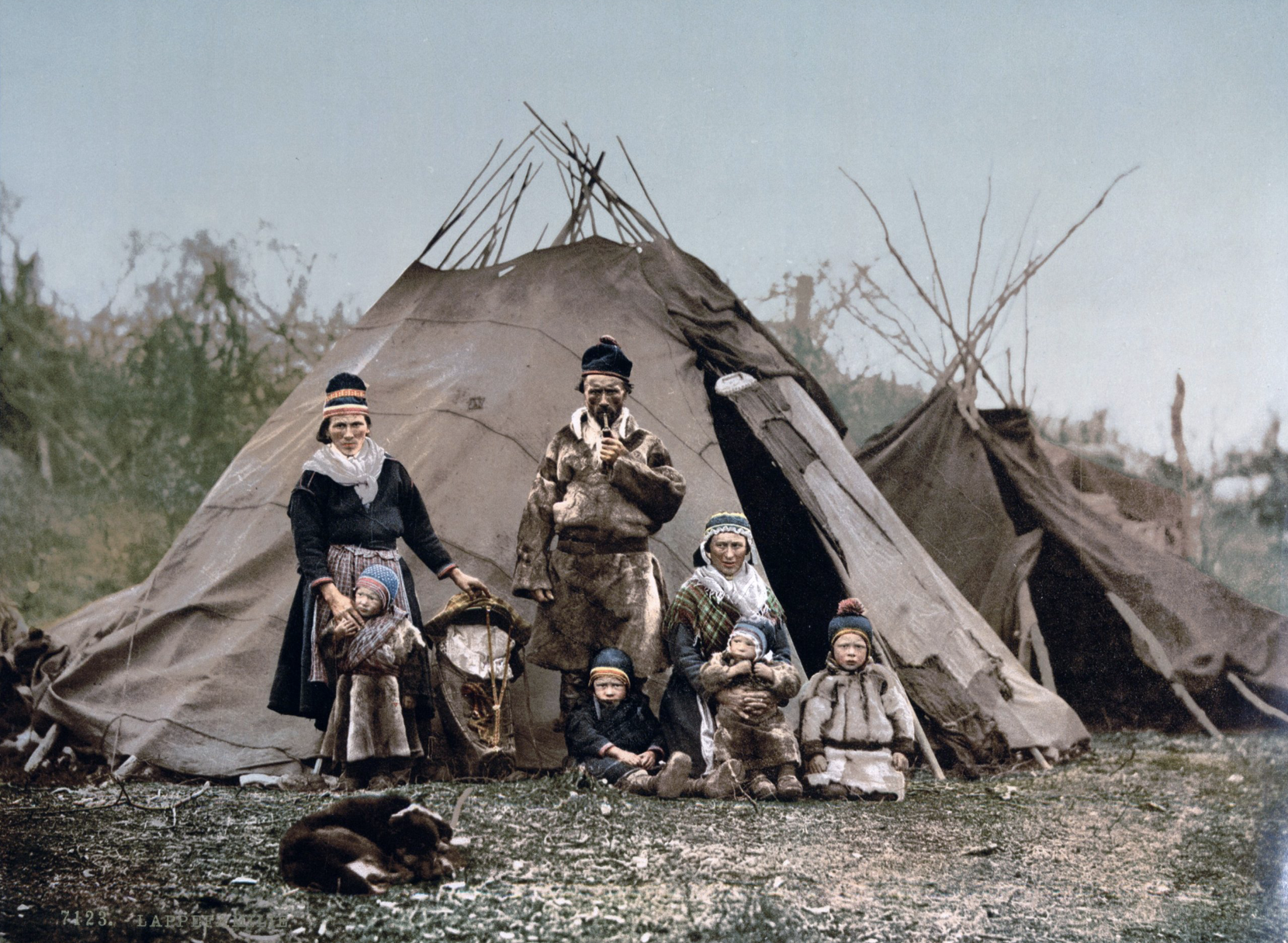 Abbey Museum’s Camping Through the Ages

Camping can be traced back further through history – from the war camps of Ancent Roman legions to the stone age tents – but we promised just a very small slice of camping history!

We were inspired by the breadth of camping through the ages and wanted to create a raffle with a prize pack representing both modern and medieval camping styles – so we thought, why not both? To raise funds for Abbey Museum of Art and Archaeology we created two raffles, one representing Camping in 2020 (with a little touch of the medieval!) And another to represent Camping in 1420 with items which wouldn’t be out of place in our own Medieval Festival!